Need to visualize a prismatic color or wood grain finish in real life?  We’ll ship samples to your door.  For free.  It’s easy.

Metal Fabrication, Consultation, Design, and Installation. These are just a few of the services IMARK offers. Check out our catalogue of services that we provide for our clients.

You’ve probably already seen our work. View our past projects and case studies to learn more about IMARK’s approach and how we are up for the challenge of your next project.

Public artwork, whether you love it or hate it, has been around for a long time.  How long may you ask?  Perhaps the most obvious examples of public art date back hundreds of years when monuments and civic statues were erected in cities like Rome.  Yes, they were often in tribute of military conquests or ruling Emperors but the fact remains that these cherished and widely studied artifacts play a vital role in understanding our predecessors and societies of the past.

Did you know that cities such as Edmonton and Calgary have been incorporating public art components into eligible construction budgets for publicly accessible projects as far back as 1991?

Is Public Artwork Worth It?

Public art is just that, public! Free for all patrons and visitors of a city to see, critique, examine and ponder.  So at first it seems as though an admission-free attraction doesn’t justify its cost to builders and taxpayers; however, contemporary cities view public art differently. They view it as a way of enhancing the way of life and cultural significance of the city by encouraging interaction among citizens, tourists and critics alike.  Public art doesn’t just create vibrancy for a city but its local economic spinoff can also have enormous effects.

According to Calgary Arts Development, in Alberta, one million dollars of investment creates 22 full time jobs in the arts, recreation and entertainment sector. That labour total does not even include the team of individuals who will come together to bring the artist’s vision to life such as the engineers, fabricators, construction companies, landscape architects and many more.  Some public art projects can be massive in scale while others may be integrated into smaller projects such as pedestrian bridges or a more functional item such as a metal railing, tree grates or benches.  Public art programs are also a way to bring tourism to a city.  For example, according to the Public Art Fund of New York City, New York’s Waterfalls cost about $15.5 million to build but brought in $69 million in tourism for the city. Cha-ching!

Realizing these economic and social benefits, cities like Edmonton and Calgary have been advocates of public art for some time.  That’s why they, like so many of their counterparts, have implemented programs like the City of Edmonton’s Percent for Art.  This program ensures that 1% of an eligible construction budget for any publicly accessible municipal project, is for the acquisition of art.

An example of an art in public places project that we were fortunate enough to be a part of was the City of St Albert’s St. Anne Street Realignment.  This project was undertaken to provide a more balanced street whereby enhancing the movement of pedestrians, cyclists and motorists throughout downtown St. Albert.  As such, the City of St. Albert’s Art in Public Places policy provided the necessary funding for the commission of a feature fence that would be installed along the new roundabout.  IMARK’s role was to help bring artist, Terolenn Mykitiuk’s feature fence to life by laser cutting some of the city’s most recognizable landmarks into the metal fence.  In her words, “the concept for the fence was inspired by the city’s culture, community and vibrancy as well as the goal to promote a place of gathering.” 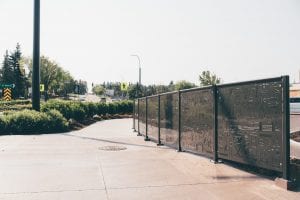 Why We Need It

Neatly integrated as an art piece that is both functional and artistic, Mykitiuk’s creation speaks to the way art offers an exciting foray into the way the public can experience art.  While not every project we hear of in the news is meant to be as neatly integrated into its surroundings as the St. Anne Street example, public art is good for cities. Sculptures, mosaics, metal features and whatever else the creative minds can dream up, elicits emotions in all of us. Opinions and discussion in the press, good or bad, signifies that the art has achieved its intended purpose to inspire, bring communities together and create a mark in history.  The buzz that is created by local art encourages tourism, creates jobs in the arts and other service sectors, and as a result can help facilitate economic spin offs in these flourishing communities.

How facade renovations transform your commercial building and save you money 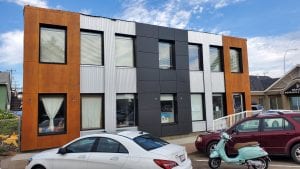